Where the Wild Things Are - The Rocker

A friend asked if I would paint a silent auction item for an Ability Gives fundraiser ~ Locomotion 2013.  Ability Gives helps to create life changing experiences for young people with disabilities by helping their families obtain much needed medical devices, mobility and communication aids.  Many of the children my friend works with find it necessary to access this funding. That's good enough for me.

I was pleased to hear that the rocker raised $225 for Ability Gives.  Thank you Maurice Sendak for your fabulous characters.  One of my favourite Sendak quotes, "Some kids when you meet them, you know you'll hate their parents." 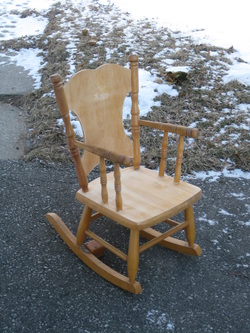 I bought an old children's rocking chair which is in good shape and weighs a ton so it must be oak.  It's the first thing I've bought on Kijiji.  I wish I'd taken this picture before I sanded it so you could see the 50's kitten decal which was on the back.  Note the small box on the rocker - it's tinkles when it's rocks. Very creepy if you hear it in the the middle of the night.

Dave suggested Where the Wild Things Are, which everyone loves.  So that will be it.  I'll post pics as it's painted and I hope the snow on the ground behind the chair disappears.

The Pattern and the Basecoat

This is the paper pattern, very messily drawn up from Where the Wild Things Are by Maurice Sendak.  The painting area has been basecoated with the background colours. The first basecoat was in white, which brings out the colour of the next coat.

Filling in the background before starting the trees.  I'm not crazy about the water, but it may fix itself while I'm upstairs.  It happens.  Also, a large Wild Thing will be in the water taking up space.  That's Northern Exposure on the tv in the background.

Painting the trees and killing my back because I'm painted standing up.  I'll just have to prop it on my knee.

Max did not co-operate and I struggled with his face. The camera kept creating a shine so I turned the flash off to take the picture.  He's a little faded looking.  Looking at him, I see I have to fix his crown.  It goes over his arm on the left side. No wonder it looked so big. Hmm. That will be tomorrow.

I've finished with Wild Things two and three, struggling with faces and hair.  I've taken some liberties from Mr. Sendak's drawings.  Now on to leaves and various ground greenery, touch ups and varnishing.  Did you know one of the Wild Things was a girl?

And it was still hot.

The chair is finished, varnished, washed up, and the musical box  has been oiled.  Ready for delivery